Marc hefted the weights smoothly, up and down, watching his muscles ripple in the one-way window. He knew he’d never have the diamond-cut physique of one of those arrogant strength Supers – they had something of an unfair advantage after all – but he worked hard to look good, and he enjoyed the fact that his efforts showed.

His apartment was on the first floor, and for the most part excellent, but setting up his home gym in one of the two front rooms had been initially problematic due to the large bay window. After taking advice, Marc had installed a one-way window – a large pane of glass that allowed him to see out, but nobody to see in. And the slight tint made it excellent for checking out both his technique, and the passers-by at the same time as he lifted, somewhat relieving the boredom of the exercise. It also meant he could exercise wearing as little as possible – a pair of tight lycra shorts being his referred outfit.

Interrupting his ruminations was a commotion outside, something that turned the normally calm pedestrians into a running, panicking mob.

He ran to the window to see a handful of Supers land in the street and face off against each other. Knowing it was too late to move now, Marc stayed to watch.

The fight was brief, the good Supers making short work of what was clearly an inexperienced team, and Marc relaxed – his apartment building safe. Himself, safe.

Looking thoughtfully at the tight lycra of one of the Supers in particular, she was vaguely familiar but he couldn’t remember what her powers were. As he watched her help truss the defeated bad guys and await the police, he began to stroke himself through his shorts, a small smile playing across his face as he imagined what he’d like her to do to him.

Suddenly the girl looked up and smiled directly at him, her face a picture of disgusted laughter. His blood ran cold, and as far away from his penis as it could. She shouldn’t be able to see him.

Marc swore as he recognised her outfit – silver and ocean blue swirls, not as tight around her s he would have liked, but still accentuating her musculature and curves. A telepath. And he was fondling himself whilst thinking about her.

He shoved himself away from the window, tripping over his weights and landing on the floor, sprawled on his back.

The telepathic Super curled her lip at him and turned away, dismissing his existence entirely.

Marc felt the heat of shame cover him as he pulled himself to his feet. He left the front of the house, thinking a desperate apology at the Super as he retreated to his bedroom to hide out the rest of the events happening on his street. If the ground couldn’t swallow him up, then at least his duvet could. 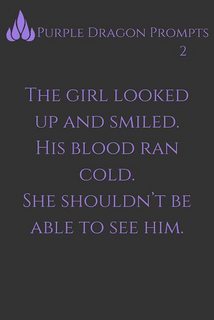 Purple Dragon Prompts 2. The girl looked up and smiled. His blood ran cold. She shouldn’t be able to see him.