The body lay, still and silent, on the couch which sat in one corner of the laboratory. It looked peaceful, as if it were sleeping, except there was no movement to indicate breathing.

The blanket which covered its white lab coat had a note pinned to it, and Jenna approached, leaning over slightly to read it aloud.

“Please do not disturb my body, the experiment would be irrevocably ruined.”

She stood, brushing back the lengthening pixie cut that had flopped into her face, and turned back to the door.

From the doorway, Tameka gave her a frown, “What the fuck’s that supposed to mean?”

“It’s a haunted house, Tammy,” her younger sister Esther shrugged, loudly chewing her gum. “Its just a scene, like, you don’t get the whole backstory and shit.”

“Then they shouldn’t give us current story, should they,” Jenna came to the defence of her girlfriend. Honestly, Esther was annoying her as usual, and the sound of the gum being chewed was about to send her into a spiral of destruction from which nothing would be safe.

Esther, as usual acting like she was 12 instead of 19, just shrugged, popped her gum between her teeth, and wandered off to the next room.

“I hope something jumps out at her and makes her choke on that shit she chews,” Jenna murmured, making Tameka – who hated being called Tammy – snort with laughter.

“Alright hot stuff, let’s get to the party,” Jenna nuzzled Tameka’s neck. “I have plans for you that don’t involve the brat.”

Tameka shivered slightly and smiled, “My modesty forbids me from suggesting that I am totally into those plans…”

Jenna laughed and tugged her along, “C’mon, Esther can find her own way.”

Tameka made a token protest as she allowed herself to be led past the various horrors, and towards the thumping music at the very top of the house. 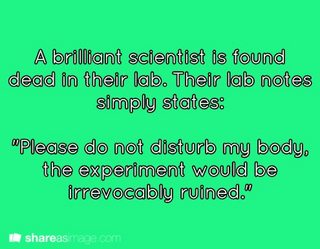 A brilliant scientist is found dead in their lab. Their lab notes simply states: “Please do not disturb my body, the experiment would be irrevocably ruined.”