Jase returned home, exhausted, but not able to drop just yet. He deposited his clothes in the washing machine, adding heavy duty cleaner to remove the acrid stench of smoke and petrol. Removing it from himself required a hot shower, and he headed there next, wetting his curly brown locks under a stream just a fraction too hot for comfort and scrubbing himself down, watching his tan skin turn red and blotchy.

If only scrubbing away the act, the memory, the knowledge, was so easy, he thought, and not for the first time.

He understood that some revelled in destruction, that they would relish this work he so hated, but it had only ever been about the money for him, the desperation, the need to escape and be a person instead of the pile of dirt people telegraphed their disgust in when they saw him, homeless and starving, and daring to get in the way of their comfortable ignorance.

Head down, Jason let the shower run over him until he realised he was swaying on his feet, drifting towards sleep. He jerked his head up, turned off the shower and dried himself with one of Danson’s huge, fluffy, person-sized towels. He scrunched his hair to remove the worst of the water, tied it into a loose ponytail, and left it for now – his only real vanity, those long curls, and he would have to wet them again after waking, but he was far too tired to dry them properly right now.

He carefully folded the towel over the heated rack to dry, and padded, naked, into the bedroom. It smelled of Danson, even though he wasn’t there – he would be long gone to work at this point, Jase knew, and wondered if news of his deed would reach him.

Jase drew the duvet under his chin and reached for one of Danson’s pillows, breathing in his scent as he closed his eyes to sleep.

Waking, some hours later, the room was near dark. The last light fading from between the cracks of the curtains played over Jase’s gaunt face, making him look, for a moment, skeletal. His dreams had echoed with the crackle of flame and the cries of the trapped, the sound of his sprinting feet as he fled down his carefully pre-planned route to come out as far from the flaming corner of the docks as possible, panting, cursing his handler for not mentioning there would be people inside – that was not part of the job.

He shook his head, and sought normality. He wet his hair under the showerhead and blow-dryed them, spritzing gel onto them while they remained damp and letting them fall down around his ears, just touching his shoulders.

He raided the kitchen for food, and began preparing a simple carbonara, the familiar smells and movements calming him, hoping Danson would be home before too long.

Danson arrived as Jase was thickening the sauce, and as his arms crept around him, holding him close, Jase breathed in the safety and love of his red-faced, gentle bear of a boyfriend.

Turning the hob off, Jase plated their meals and they ate in easy silence, side by side around the table.

As Jase served dessert, the remains of a cherry pie with heated custard, Danson leaned back in his chair and studied his face, “What’s wrong?”

Jase shook his head and forced a smile, “Nothing, I’m ok. How was work?”

Danson narrowed his eyes for a moment, but let it go for now, “Bloody awful. Two of the witnesses we have in The Case,” the capitals pronounced themselves so Jase knew exactly which case was being referenced – this was how Danson and Egs referred to it now, “Well they got kidnapped, and then someone set fire to the warehouse they were being held in. We got them both and couple of what we think are the kidnappers out, but the rest… Fuck me, they just stayed there, let themselves get all burned up in a nice, neat little circle. But Drew and Vicky, they’re ok, and the other two, we got them – robes and weird occult shit and all. When they recover enough to speak, they’ll probably give themselves up. One of them indicated it was the will of the creature – has to be the same asshole as ours.” Danson shook his head as Jase tried to make sense of the somewhat disjointed recap, and an the nasty jolt as he realised where he fit into it.

“Did they set the place on fire themselves?” he asked, tentatively.

Danson shrugged, “I figured so at first, but the fire investigators say the accelerant was on the outside, so either they sent someone outside to burn them the long, slow way, for some fucking reason, or it was someone else, but fuck knows why or how that’d be.” Danson heaved himself upright, rubbing his face in his hands.

Jase watched him, afraid to open his mouth, confession on the tip of his tongue. Seeing Danson like this when he could solve some of the problem gave him a sharp pang in his stomach.

Danson turned back to him, shaking his head and smoothing down the sides of his hair, “Your turn, love. What’s up with you?”

Jase pinned his mouth shut before the words could come clamouring out, but couldn’t control his eyes. Tears formed, and then began to fall, and Jase dropped his head into his arms on the table as all the years of fear and guilt began to escape the box he had locked them into.

Danson was immediately kneeling by his side, arms around him, stroking his back and hair and murmuring softly, “Oh my love, it’s ok, it’s ok, I’m here, and I love you, and there’s nothing you can’t tell me. I love you, Jase, I love you. What is it that hurts you so much?”

Jase raised his tearful face to Danson, hitching his sobs back into his chest, “You’ll wish you never asked me that,” he whispered and dropped his head back onto his arms.

“That’s for me to worry about, love, talk to me, whenever you’re ready, talk to me.”

It took a while, and a large measure of scotch, for Jase, now enveloped in Danson’s arms on the generously large sofa, to begin talking.

Danson listened, forcing himself to remain calm and silent, as Jase poured out the homelessness, the despair, the sudden offer of safety and money, the things he’d done – never murder, never violence against another person, his handler seemed to know he would never stoop to that even in the deepest pits of desperation, but fires, thefts, fraud, blackmail, and the latest – this fire.

“I didn’t know there was anyone inside, I swear, I would have waited for them to go, I wasn’t told they’d be there and I didn’t see them or hear them and the door was locked, I’d have waited, I’d have waited I would never have set fire to it while I new anyone was inside,” Jase turned around in Danson’s arms his face begging him to believe.

Danson’s face tightened, his eyes harder than Jase had ever seen them, but he nodded, “I believe you wouldn’t have set the fire if you’d know anyone was inside.”

Jase nodded, the assurance giving him a feeling of calm acceptance, “But it doesn’t matter, does it? You have to turn me in. It won’t matter than I didn’t know. I’ll give you all the details I can remember of the other times, and my handler, I won’t leave a thing out. I promise. Just… Please… Can it not be you that arrests me? I know someone else will probably treat me worse, but I… I can’t have the memory of you doing that.

Danson looked at Jase’s tear-stained face and pulled him close, “I don’t know what I’m gonna do, love. I can’t let this stuff go, it’s my job, I swore myself to the law and I can’t ignore that, even for you. But let me think, there might be a way. These people, this handler, they’re the key to something – they must have known who would be in that place. I wonder if… I wonder if we can connect the other things they had you do to this creature, too. But I can’t do this just me, you understand? I need someone in on this who can help, and make sure I don’t fuck things up, or try to let you off because I love you, or anything like that. I need someone I can trust to go with me on this, and see what we can find. And I need you to swear to me that if you hear from them again – I know what they said but if you do, you’ll tell me right away.”

Jase nodded, “You’re going to investigate quietly, because if you send me in and things start coming out the creature and the others, they’ll all know. But you need someone to make sure you’re kept on track.”

Danson nodded, “And to hold me accountable if somehow this all goes to shit. I need to call Egs, and you need to tell her everything you told me, ok?”

Jase nodded again and sat up, allowing Danson to get up from the sofa, “Danson…”

“He sighed heavily, ignoring Egs greeting on the other end of the phone for a moment, “I still love you, Jase. I don’t know what that means right now, and we’ll have to figure it out, but I do. I understand why, and I’m angry at you, and I’m a lot of other things, but I still love you. I just… I don’t know.”

“Can you come over? We’ll explain.”

“On my way, bringing alcohol,” came the reply.

Danson dropped his phone on the coffee table and sat beside it, staring at the floor between his feet, “You know you were right,” he said softly, “I kinda wish I hadn’t asked.” 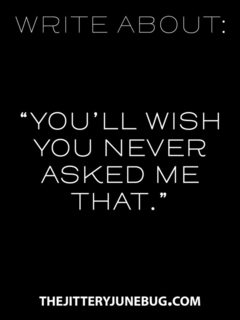