The creature floated through the waves of darkness. It reached across the curtain and touched mind after mind, looking for a hook, a glimmer, a way across the divide. It hungered, and the hunger made it restless. It had been so long…

Ah! There. Something promising. It felt desperation, hate, faith. Someone called on their gods to help them. It would save their gods the hassle.

Hilda knelt in the circle of power, her tunic and plaited blonde hair dark in the shadows, drawn around the altar in blood from the ox that lay atop the cold stone, completed with runes denoting the gods of the village. Blood leaked from its neck wound as its life faded, and Hilda drew the final symbols upon herself. She prostrated herself to Tiw, the war god, taker of life, arbiter of justice, and friend to the wolves that howled in the forest that stood tall around her.

“My life and my ox are for you, Tiw, please help us, who worship you faithfully. We go against our enemies who would see us dead to take our land, topple our faith, murder us and our children. Please Tiw, grant us justice, show me you are with us.”

A figure appeared in the circle as Hilda raised her head. Blue eyes sparkled out of a pale face framed by a golden helmet which rose and twisted at the top into something like wings. He was clad in an unadorned red tunic, belted at the middle, and leather sandals with straps winding up and around his legs. A black cloak of fine cloth was clasped at the left shoulder. A sword hung from his right hip, a shield on his back beneath the cloak, and when he moved Hilda saw the stump of his right hand.

Seeing this, she knew Tiw had come to her and pressed her head to the ground before him.

“Sit up!” the false god thundered, the creature enjoying this act immensely. “You called me, now face me.”

Hilda sat back on her knees and looked up at him, waiting.

“You wish for your enemies to be destroyed.”

“Why should I bless you, over them?”

Hilda’s eyes widened at the unexpected question, but she gained herself before her god could become impatient, “We have been at peace in our village for many years, but drought affected many of us, and our neighbours. While most of us are working harder, rationing, praying for help, one village is now attacking others to wipe them out and take their land. We won’t give ours up to them, so instead of waiting, we have arranged to battle for rights over our land and theirs, and all that live in them. But they are stronger than us, and we will lose, unless you help us. I lead us into battle at dawn tomorrow and I ask you, I beg you, to be with us.”

Hilda finished her speech and sat very still, staring into the god’s eyes while she waited for a decision. If he disliked her plea, he might end her this very moment, or leave her to die in battle. If the mood took him, he might even side with the enemy, or destroy all sides of the conflict. So she waited.

“You are brave, child,” Tiw answered eventually. Tell me, warrior of your people, have you yet wed? Borne children?”

Hilda shook her head. It was not unusual for women in her village to take the sword before taking a husband, and she was their most prized fighter.

“Then promise to me, once your enemies are dead and your land is safe, you will choose a husband and have a child. This child will belong to me, and some day I will come for them, to sit at my right hand,” Tiw flashed his stump with a twisted smile. “They will join me in the Heavenfields, and fight for my justice in all of the realms.”

Hilda smiled through sudden tears, “Yes. Yes, I promise this. Only see us safe, and I will do as you ask, and on the day you come for my child I will kiss them one last time and give them to you with as much gladness as sorrow.”

Tiw nodded and held out his hand, “Come to me then, Hilda. I will mark you as mine, and at dawn tomorrow I will see your enemies gone.”

Hilda stood and took his hand, letting out a hiss of pain as the Tiw rune on her right cheek became a blaze of fire, branding her forever.

Tiw faded and Hilda bowed her head for a moment, before leaving the circle. The ox would be dragged from the altar tomorrow after the battle was won, and the forest would take care of the rest.

A few hours later, dawn crept over the tops of the hills and Hilda stood in front of everyone in her village that could fight. Her back was turned to the enemy on the next hill, and her face was calm as she strode down the line.

She turned and stood to face the enemy, plaited hair curled around her neck, freshly sharpened lance slung across her back, ready to pull. Her tunic was cinched at the waist, and her sandals wrapped tightly around her legs. Her steel helmet was new. It had been waiting for her in her war chest, gleaming, the Tiw rune carved into the front, the whole thing perfectly fitted to her head and face.

As the dawn light rose high enough to cover the valley between the hills, the enemy began to step forwards, led by a heavyset, red-faced woman, whose lance caught the gleam of the sun. When they were but a short sprint away, the woman frowned at Hilda, confusion written across her face.

Hilda saw the sun glance off the other woman’s lance, saw the Tiw rune cast with metal into the wood, and a cold knot tightened in her stomach. If each bore the rune, had Tiw come to them both?

The field was covered in various bits of armour and weaponry, all shredded to pieces and scattered about, but no bodies. Not a drop of blood.

The creature spread its many arms and legs and savoured the taste, antennae flicking back and forth as it ate the lingering scent of fear. The trick had weakened it at first but oh, the fun, the reward, the return was more than enough – it was drunk with the influx of food and power.

It wrapped its arms around itself and returned to the place between places, to savour this meal,and await the next. Perhaps some day it would follow through and see if the desperate would actually give it their firstborn.

It smiled to itself as it settled back into the eddies of the void. That might be fun to try. 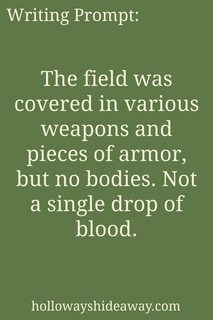