Elise boarded the bus, in the middle of the evening lull, making her way home after her post-school, end of the week shift at the chippy. She flashed the pass on her phone to the driver, who nodded her on with barely a glance.

Only a handful of other passengers were aboard and she headed for her favourite seat, a little over halfway, just before the step up to the back rows, where three teenagers sat with their feet up on the seats. Settling in for the 40 minute journey, she pulled the headphones around her neck up to her ears and poked at her phone, scrolling through her music for inspiration on what to listen to.

As she scrolled, she overheard the teenagers talking about Frankie, her best friend at school, and one of the very few people who Elise liked and trusted. She hadn’t been at school the last couple of days, and had told Elise she wasn’t feeling well when asked, but there was clearly something more to it, and these teenagers seemed to know.

After a quick wrestle with her conscience, over whether it was right to find out by eavesdropping what Frankie wasn’t ready to tell her yet, Elise decided to see what was going on. She could always pretend not to know until Frankie was ready, but at least this way she would know what her friend needed. So she nodded along with the non-existent music, headphones hiding her attention on their conversation.

She tried to place the people as they spoke, recognising two from school, but unable to place to other.

The one who had spoken Frankie’s name, Jessop, was laughing at whatever he’d said.

The other two, Mitch and the stranger, followed suit.

Finally, the one she didn’t know spoke again.

“And then, then, right, then her mum threw fucking pop on her dad, called him a dick-brained-cheater, and left! So Frankie’s fucking sat there with her dad, and there’s coke dripping down him, and everybody’s staring, and he’s trying to clean it up with those tiny scrappy napkins, just getting them all soggy. And Frankie’s so red it looks like she’s about to explode. And then she picks up her lemonade, and fuck me if she doesn’t throw THAT on her dad and storm out after her mum!”

The three teenagers collapsed back into laughter for another few minutes. By the time they recovered, it was their stop, and Elise pulled out her phone and sent Frankie a message.

A reply came back after a moment, as Elise texted her mum to let her know she wouldn’t be home for dinner, and prepared to get off the bus early.

K, I guess I gotta tell you what’s up anyways. Ordering pizza n u can shower here if you wanna. Mayb stay over?

Updating her message home, to let her mum know not to expect her at all tonight, Elise got off the bus and made her way down the street to Frankie’s house, knocking before walking right in – as she had been doing for years.

“Oh hello, love,” Frankie’s mum greeted her, face puffy from tears, drawn and grey from lack of sleep, “Pizza’ll be here in a bit, I’ll bring it up. I’m glad Frankie’s got you. I-go on up.”

Her eyes sparkled with tears and Elise nodded, quickly making her way for the stairs before it got any more uncomfortable.

In the room, Frankie was curled up on her bed, cuddling a selection of stuffed animals to her chest. Tears that had dried on her cheeks fell anew as Elise crawled over her to get behind her on the bed, moulding their bodies close and holding her tightly.

“I’m here Franks,” Elise murmured, “I got you. You don’t gotta tell me anything til you’re ready. I got you.”

Frankie grabbed hold of Elise’s arm and cuddled it tightly, weeping. When she was ready, when she was cried out for the moment, when she could form the words, then she would talk. 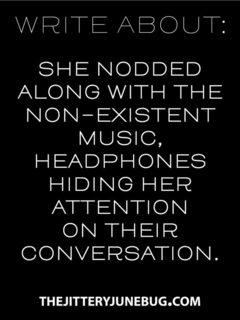 Write about: She nodded along with the non-existent music, headphonees hiding her attention on their conversation. The JitteryJuneBug.com