The crowd cheered as the combatants entered the pit, a sunken circle of hard-packed dirt, oiled with linseed and mixed with the blood of years of matches. Each had their own reasons for entering the pit – money, fame, freedom, pride, to prove something to themselves or others – but each was treated equally. A randomly chosen match-up. A fight to submission, knockout, or judgement that one was unable to continue. A winner’s purse based on bets made by the crowd.

Some chose to stay long after they needed to. Some chose to leave the second they could. But all left changed. Such was the pitch given to Tanya the night she stumbled, broken-hearted and drunk off of her last coppers, into one of the pit scouts.

Still drunk, she had slurred a challenge and flung fists crackling with ice at them, only to find herself rattled by the force with which she was put onto the ground.

She had rallied for another try, but the voice coming from the cloak had offered her a place in the pit, and after a few moments of thinking through her drunken fog, she accepted.

So here she was now, an ice-powered human, pale as snow in face and hair, stepping out into the lights and the cheering, wearing nothing but a jumpsuit.

Her opponent, a goblin she had shared a table with at her last meal, stepped out on the other side, dressed in a robe with the hood down, showing their red, hairless face, made sickly by the lights.

Cameras floated around them at a safe distance, screens around the crowd showing various angles for those who couldn’t get a good spot ringside. A few phones flashed, taking photos.

Then the magically amplified voice of the Announcer spoke.

“Good evening to you all! Thank you for joining us for tonight’s bouts, we have a great roster for the night! Bets are off for this fight as of now, and your phones will not work while the match is ongoing so don’t waste your effort trying to get photos or video.”

The Announcer paused, allowing the room to settle slightly.

“First on today’s docket, as you can see, we have two powerhouses of magic! The human is Tanya, it’s her first time in the pit, and she’s hoping her ice magic will win the day! The goblin is Fr’tl, they’re working off a prison sentence, and their shadow magic has given them every match so far! I hope you bet wisely, folx, because the battle! Begins! Now!”

A horn blared and the fight was on.

Fr’tl grinned at Tanya who gave them a shaky smile back. She was reluctant to charge them, unsure of how much force a goblin could take. Instead she forced the ice into her hands, formed it into balls, and let a number of them fly.

The goblin didn’t bother dodging. The balls were knocked out of the way by shadows that rose from the silhouette cast by the lights.

Tanya formed a large number of smaller projectiles and, moving herself around the pit, edging closer, let them fly again.

Fr’tl still smiled and knocked them easily aside.

“Aw for fuck’s sake, come on!” Tanya swore, summoning more ice and preparing for her a different attack. The air around her grew oddly warmer as she sucked all the cold from it.

Fr’tl took the opportunity to remove their robe and Tanya stopped mid-summon.

All over their body were tattoos, looking like fresh wounds except for their deep purple glow. As she watched, they pulsed and writhed in time with her heartbeat, daring her to attack.

Fr’tl stood very still now, as if any movement would pain them, and Tanya looked carefully for a way in, to end this quickly before she found out what those painful-looking tattoos meant. Brawls she could do, but this? This was something beyond her experience. In the back of her mind, she cursed her drunken self for getting her into this.

Abandoning her ranged plan, Tanya took a few steps back, turned to the wall, ran towards at at an angled sprint, ran up it a few steps then launched herself off, twisting to face Fr’tl as her fists covered themselves in solid ice.

She brought both fists down in a quick one-two as she landed, only to find herself batted away by sudden wall of shadow that appeared and disappeared in a moment.

She hit the wall and slumped against it for a second, shaking her head.

As she looked back at Fr’tl, she saw the marks on his body begin to writhe, pulling away from him. Though he continued to stand perfectly still, the eyes that locked with hers were full of pain.

“Forgive me for this,” they said in her mind, the markings springing free and moving towards her.

This was a different magic to any she had seen before. A darker magic. As the whorls of darkness and shadow whipped through the air towards her, the painful-looking black markings on the goblin’s body made more sense. But it was too late to back out now.

The shadows speared into her before she could move, filling her with a coldness even her ice had never achieved. She fell to the floor, darkness taking over her mind, barely hearing the Announcer as they declared Fr’tl the winner.

Later, waking in the pit infirmary, she found herself covered in blankets with Fr’tl sitting in a chair by her bed.

“There’s not much to heal but the cold sticks around a while, I’m sorry about that,” they said, seeing her stir and shiver.

“That’s some power you got there,” Tanya responded, giving them a small smile.

“Not gonna pry, don’t worry,” Tanya assured them. “Why are you here though?”

“Because I liked you, and I felt bad – it was obvious you didn’t know much about pit fighting and all, and I wanted to suggest you leave if you’re not indentured. I have some prize money being kept for me – I still get that even while I work off my sentence – I’d like to loan you some to get somewhere better. Then when I’m free, I can come find you. I’m not going to have many friends on the outside, it’d be nice to have you.”

Tanya stared a Fr’tl for a few moments. “How long left on your sentence – if you keep fighting?”

“Provided I’m fighting, I’ve got about 3 years to go.”

“Then teach me. I’ll stay here, you can teach me to fight, then when we go, we can go together – with both of our bags of prize money. And I’ll pay you for the teaching when we get out.”

Fr’tl looked at her curiously, “Why?”

Tanya thought hard. Back through the years on the street, robbing and being robbed. Back through the abusive partners she’d clung to, trying to recreate her abusive childhood. And onwards, to a day she was free of her past. And she smiled, “Lots of memories to fight, and lots of ambitions to reach. I need money, and I need to be tough enough, that nobody can take it. Will you help me? I don’t care what you’re in here working off your sentence for, that’s past and I’ve got stuff in my past I don’t much like either. This is future, and we all get to choose that we do with it.”

Fr’tl studied her face for a moment. She was earnest and caring, but there was deep strength behind that. Training her might be fun, and it would certainly pass the time. They held out a hand, whorls writhing and pulsing gently – the magic at peace for now. “I’ll do my best. No fee, just a promise of friendship when we leave.”

“Alright!” Tanya took the hand and shook it.

“First lesson, then,” Fr’tl stood, putting the chair neatly away. “Recover properly. I’ll see you back in the dorms tomorrow.”

Tanya nodded and settled herself cosily under the blankets, drifting to sleep with thoughts of what to do with the prize money she was determined to win before she left. 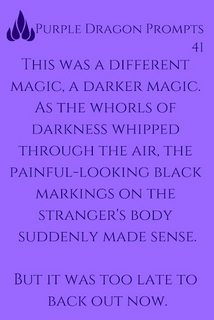 This was a different magic, a darker magic. As the whorls of darkness whipped through the air, the painful-looking black markings on the stranger’s body suddenly made sense. But it was too late to back out now.

The Price of Spice

“You’re a dwarf!” The human’s green eyes widened as she expressed her surprise the second she walked in to find Zan, a sallow-skinned dwarf with amber eyes and a shaved head, sitting at the table.

Zan said nothing, the surprise wasn’t unusual. It was a common belief that dwarves couldn’t use magic – a common one, but an incorrect one. It was just rare, thanks to the long ago Purges that erased entire magical bloodlines, a fact that Zan didn’t feel like explaining to every non-dwarf (and some actual dwarves) she met.

“Sit down, please,” she offered instead, indicating seats for the human.

The human nodded and sat, “Sorry, I was surprised, but that was rude.”

“It’s a common reaction, don’t worry about it. You had work for me? What might I call you, in order to interact properly?”

Zan looked at Yazz, taking in her auburn hair and dark skin, “But they can’t protect you from everything, and that’s why you need me.” END_OF_DOCUMENT_TOKEN_TO_BE_REPLACED

Swallowing the urge to flip the switch in her head that would make her instantly forgettable the moment someone stopped looking at her, Nyasha opens the door a crack and attempts to slide through.

The tips of her toes get caught in a small gap between the floorplate and the floorboard and she stumbles forwards.

The jubilant tavern crowd falls silent as the human patron enters, crashing bodily into the group of rowdy drunken dwarves nearest the door.

The dwarves stand the human upright and laugh raucously, before dismissing her and returning to their drinks.

Nyasha hangs her head, silently berating herself, the urge to be forgettable returning strongly. But she can’t this time. At least, not yet. Not until she can be sure the information will go to the right place and bring the right person out to her.

The innkeeper looks up at her with a guarded smile, flicking a grimy cleaning rag over one shoulder, “Help ya, miss?” END_OF_DOCUMENT_TOKEN_TO_BE_REPLACED